The following is a blow by blow of both the inspiration and building of my “house on wheels”. I am not much of an engineer or carpenter, so these directions will probably be a little hard to follow since they are from my mind – a nebulous entity!

Why a truck bed build?

The more I contemplated where and how to travel on my six-month interim, I continually returned to the question of whether or not to travel internationally. Initially, I had a long list of locations lined up including Iceland, Ireland, Britain, Germany, Greece, Thailand, New Zealand, and Australia. I had plans of what I’d do in each location, believe me, but how I was going to fund this travel was much more cloudy. International solo travel also seemed a bit more daunting than I was ready to tackle.

Eventually, I realized how little I had seen of the United States. Names of people I could crash with around the country also popped into my mind, making a US road trip financially attractive as well. To top it off, I realized Zeus would be able to travel with me if I went on a huge roadie, and in the end he was the deciding factor. I’m still working on the cats, but they aren’t showing much interest in camping.

What will I be converting?

In 2012 I bought a 2006 Ford F150 with a 6.5’ bed, and I was able to score a pretty awesome deal on a used ARE topper from Auto Trim Design in Great Falls. The topper is carpet lined, has an easy access door, and a back hatch that can be lifted for full access and to offer shade. I also wanted a topper with added headspace, like this one with roughly 5 more inches, allowing me to fully sit up on my bed. The topper also has a skylight, and who can turn that down??

How did I decide on a build design?

Two words: Pinterest & YouTube. Since March I have watched countless videos on others’ truck builds and picked bits and pieces from most. I decided on a few parameters: the build needed to be fairly simple due to my ability level and time constraints, would need to be cheap because I am cheap and because I find it a fun challenge to see how little it would really take, and would need to be able to be taken out fairly easily if I needed to use the back of the truck for anything else. I also didn’t want to drill any holes into the truck bed or topper.

I ended up using this video on YouTube by Brian Sober for most of my inspiration. He has a Chevy with an 8’ bed, so I had to change up a few things but was still able to maximize space efficiently. Many videos I watched featured full bed platforms, which would be a necessity for two people, obviously, but would also make it much harder to get around in the topper since you would then be restricted to crawling on your knees to get anything. I liked the idea of having a twin bed on one side and a large area of floor to get around in and generally make the build more “roomy”. Zeus also needed somewhere to ride since he wasn’t sleeping on my bed all the time!

The workings of my brain condensed into this highly evolved marvel of engineering one morning over coffee:

What will I need?

For this article, I will mainly be covering the basic build. Supplies listed do not include storage, bedding, etc. Stay tuned for a later update!

How is this thing going to actually work?

Ok, first things first, this is going to work because I have an awesome brother who helped me and kept me from barreling into things too quickly. At many points I probably would have royally screwed things up with my naivety surrounding woodworking, so his expertise kept me from most likely having to buy multiple sets of lumber and supplies.

First, we cut and set a 2×4 to fit in the grooves already in the bed of the truck (if you didn’t know these existed, go check out any truck bed – I bet you will find them). This 2×4 will serve as the “anchor” upon which the rest will be built. After setting the first board, we built a second support piece to make a platform to build the bed. This initial support and the bed frame will make an “L”.

Then we measured the bed frame. I decided on 25” x 70”. It’s small, I know. I am only 5’6”, so the length wasn’t a problem and I needed some space at the foot of the bed to get the hatch door closed. The width was determined by the easy access door at the back of the topper. If I made it much wider, it would be difficult to shimmy through the door and around the edge of the bed.

The bed is made of 2×4 rails and legs in a pretty straightforward design. We did have to cut one of the supports a bit to provide clearance over the wheel well, but for the most part, this plan made the wheel wells a non-issue.

The frame is attached to a 1×6 to give it stability and because the width wouldn’t allow the 2x4s to sit in the grooves of the bed. The small strip along the left upper bed rail allowed me to hinge the bed platform.

We then drilled holes through the two sets of 2x4s to anchor the bed in place.

Next was the bed platform, which I cut into two pieces, sanded, and finished with polyurethane. Once dry, I attached two sets of large hinges so I would be able to easily access underneath the bed if I wanted. 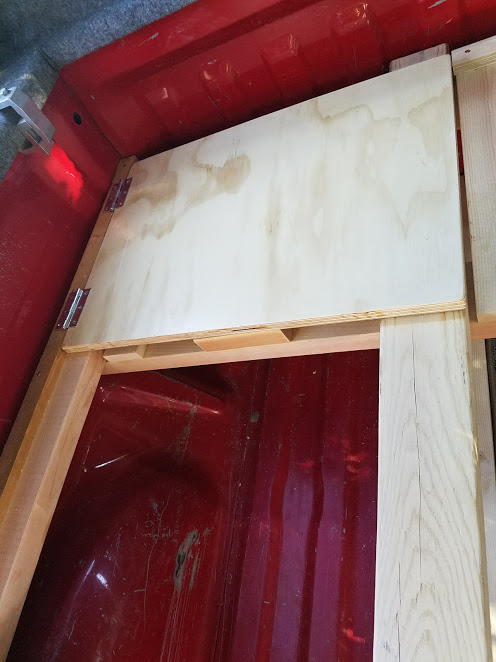 To get fancy, I added a rough-hewn half round I had laying around my garage from a different project. It really is amazing how a small touch of vanity can up the “feel” of a build!

I also finished and attached a little cupboard door to the end of the bed. The door stays shut with a strong magnetic cupboard clasp. Now, I realize this seems more for looks than practicality, but it will keep things from sliding out the end of the bed. It does look good though :). 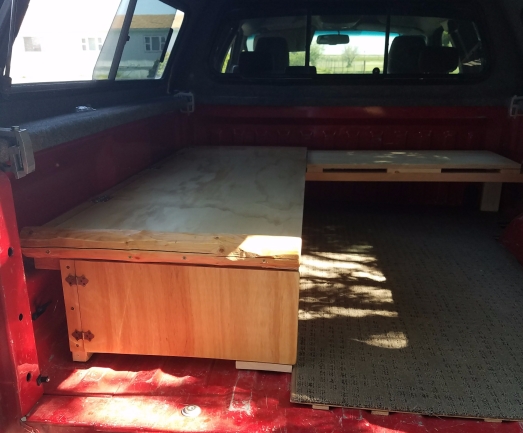 I also added a hinged platform to the supports in the upper right corner. I am not totally sure how I will utilize it other than a flat surface, but hinges are easy to install and would allow me to access underneath if I decide to “wall in” the space.

There you have it – a taste of what I have planned. The basic frame is done, and now I will be outfitting the space with all the things that make it livable. Watch for later articles on both a cost analysis and how I will outfit the space with organizers for all the “stuff” one must take on a cross-country road trip.