After my first excursion into the Colorado highlands (AKA The Land of Little Oxygen), I decided I needed to do some elevation training. I did some cursory research and was amazed at the steps the body must take to adapt to increased elevation. Humor me as I delve into some biology geekiness, most of which I garnered from Princeton and Harvard articles and an article published by APEX (Altitude Physiology Expeditions).

When at sea level, both the oxygen saturation of the air and the barometric pressure are relatively high: the air is 21% oxygen and the pressure 760 mmHg (millimeters of mercury). The only thing that changes as one travels up in elevation is the barometric pressure. The pressure drops to almost half (483 mmHg) at 12,000 feet, meaning that each breath will have roughly 40% fewer oxygen molecules. To compensate for this drop in oxygen saturation, the body increases its respiration rate, but will never truly infuse the lungs with as much oxygen as it had at sea level until the body produces more red blood cells that carry hemoglobin.

Hemoglobin essentially binds to oxygen molecules in the lungs, allowing the oxygen to then be transported to the rest of the body. The more hemoglobin present, the more “cars” the oxygen will have to travel where most needed: the heart. At high altitudes, the body must work harder for its oxygen, so it is imperative the body has more red blood cells (and thus hemoglobin) than at sea level. Most of the acclimation process involves your body producing more red blood cells so that it can adequately adjust to the reduced oxygen molecules present in each breath at high altitudes.

Other fun things that can happen include fluid leakage from capillaries which can cause excess fluid on the brain or lungs, potentially leading to high-altitude cerebral edema (HACE) or high-altitude pulmonary edema (HAPE) – both conditions that could really ruin a day. One could also suffer retinal damage or pass out in a coma, two things I try to avoid on a daily basis.

How does one keep these fun occurrences at bay? Drink lots of water and take time to allow the body to sufficiently acclimate. Everyone’s ability to acclimate will be different depending on a plethora of elements ranging from cardiac conditioning, age, genetics, diet, sleeping patterns, and drinking and smoking habits.

To aid my acclimation process, I decided I would travel to around 11,500 feet, the elevation I first starting noticing some symptoms, and find a campsite and hikes that would get me up to at least 13,000 feet. Spending as much time in that pocket of elevation would allow my body a challenge and time to overcome it since I do have plans to hike a 14er while I am here.

I had two nights to play, so I crafted a mini road trip that would provide some elevation acclimation and a good taste of Colorado mountain living. Check out the following map to see my route.

The first night I stayed at a free camping spot at Pass Lake, right next to Loveland Pass, at the daunting elevation of 11,800 ft. Bring on the acclimation! What I hadn’t expected was the massive hail storm I drove into. I had left Denver in roughly 85-degree weather and ventured into a lightning and hail storm that threatened to break my windshield. I have never been so happy to sleep inside a hard-sided vehicle.

The temperature dropped to 37 degrees by 7 pm, so I spent that evening snuggled warmly in my leggings, slippers, sweater, and sleeping bag. I didn’t notice the elevation very much until I started to drift to sleep. My chest felt a bit tighter and I knew my body was working harder than normal. However, the change was slight and I was able to sleep pretty well, barring the random thunder and rain outside. 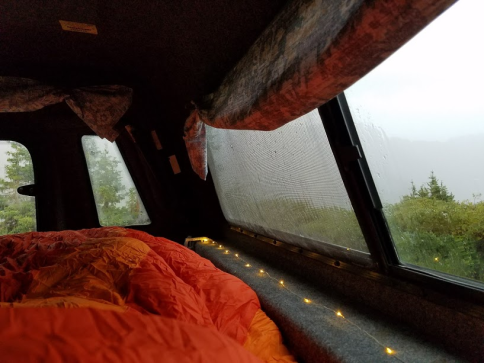 The morning dawned clear, thankfully, and I was finally able to see the gorgeous range waiting outside my window.

The air was still brisk, and I was glad I brought pants to hike in rather than my summer shorts. I drove back to Loveland Pass and hit the trail with the goal to hit both Mt. Sniktau and Grizzly Peak – both 13ers. The trail starts above alpine, so the whole day was spent in the open, hiking along ridgeline trails.

I broke for a snack and had a chat with a pika. I am finding some common ground with these alpine creatures!

All morning the sky was looking a little ominous, and I knew I definitely didn’t want to get caught in a storm like yesterday’s, so I tried to hoof it to Grizzly Peak. However, speeding up the walking cadence also meant my body needed more oxygen. The main symptom I felt was a tightening in my chest, much higher up towards my throat than I imagined. I struggle to describe it, but it feels kind of like when I am really anxious about something and my throat tightens. Many describe it like an elephant sitting on your chest, but I had a very tiny elephant and he was stuck in my throat.

I caught a little hail on the way down but made it back to the truck in time to jump in bed and take a quick nap when the sleet started in earnest. While the weather had made this first day adventurous, I was ready for some sun!

Staying on Highway 6, I traveled towards Keystone and Silverthorne, two VERY resort-y resort towns (think Whitefish times five, fellow Montanans). And these aren’t even Aspen, Vail, or Breckenridge. The amount of money tucked into the mountains astounded me, as did the availability of Target, REI, and Office Depot. Where am I??

After fueling up, I headed out of the consumerist’s mountain mecca and headed to the “boonies”. It didn’t take long to get more rural, and comfortable, as I headed north on Highway 9. The houses spaced and the sagebrush multiplied as I headed towards Kremmling. The little towns of Hot Sulphur Springs and Granby felt more like home since they were realistic with some rougher looking shops, diners, and billboards. The almost surreal cleanliness and “newness” of Silverthorne had taken me by surprise, as it looked like no one below the top income bracket was anywhere in sight. While not as picturesque, the more rural mountain towns seemed much more sincere.

Then I reentered the money fields around Winter Park. While this town is definitely quainter than Silverthorne, it still has a very different cash flow than most. I stopped for a beer and learned that most of the condos dotting the surrounding landscape were probably only occupied for weeks out of the year. Most people only like the country living for a week or two but pay for a whole year’s worth.

While the countryside seemed steeped in opulence, I found a great free camping spot up Vasquez Creek, only two miles from town. I definitely scored on the free camping this trip and felt both secure and rested both nights.

The next day I packed up and caught the CDT (Continental Divide Trail) for an easier hike to Stanley Mountain (12,500 ft).

Stay tuned for that story…