I spent a windy, rainy day driving through Illinois and Indiana. The strong gusts surprised me and, coupled with the heavier, humid air, felt reminiscent of Montana driving. I later learned that wind is definitely not the norm through this corridor, but Hurricane Nate was changing the weather pattern as it inched closer to landfall in Mississippi. The weather forecast predicted rain, lots of it, and it didn’t disappoint.

My first night spent in Ohio was rainy – the heavy, soaking kind – but luckily the morning dawned clear and ripe for adventuring. I had met up with a friend who not only has a great home and lands with a lake Zeus loved but also some time to show me around the area. 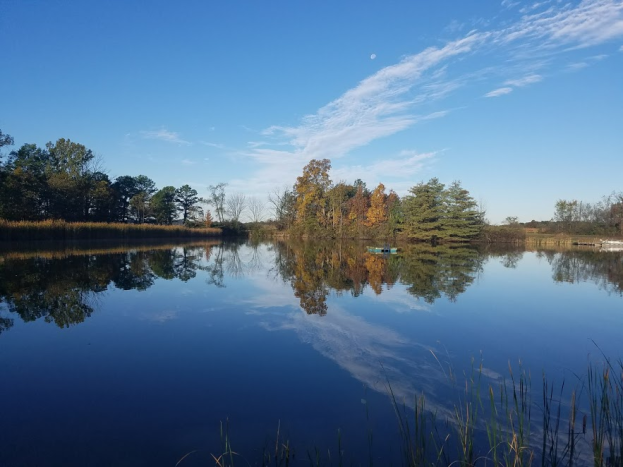 Drinking my morning coffee out on the lake.

The hills around Columbus, Ohio are lush and rolling, with corn and soybean fields dotting the landscape. We were only about 45 minutes from the Columbus metro area, but it felt rural and quiet. Farmers are still fighting to make a living here, and from what I could tell and hear, they were doing a pretty good job.

If you weren’t a farmer here, most likely you worked at the Honda plant, just minutes from where I was staying outside of Marysville, OH. The Marysville plant, which started full-car production in 1982, is one of only four Honda automobile plants in the United States (there are three additional plants in the US that manufacture ATVs, lawn care equipment, and jets). Each plant manufactures different makes of Hondas from start to finish, and at the main Marysville plant they make the Accord Sedan, Accord Coupe, Acura ILX, and Acura TLX.

They also have an additional plant that makes the Acura NSX, Honda’s top of the line hybrid supercar, something I didn’t even know existed.

The sheer size of the Honda complex was impressive, and I could easily see how the development of the plant in 1977 changed the economic future of the area.

After checking out the Honda facilities, we headed towards the Ohio Caverns, but stopped at the Piatt Castle along the way. We drove by the immense building, and I just had to peek inside.

Donn Piatt built the impressive stone building in 1864. His ancestors fled France due to religious persecution, and his grandfather helped the colonists in the Revolutionary War. The fledgling US government granted the Piatt Family land in Kentucky where they became prominent landowners and lawmen. Donn’s father, Benjamin Piatt, became a judge and moved his family to Ohio in the 1820s where he established a farm and river shipping business.

Donn Piatt became a man of many trades, including a diplomat, historian, lawyer, judge, legislator, lobbyist, novelist, and playwright. He was well known as an outspoken critic of slavery and campaigned for Lincoln’s election in 1860. He served as a diplomat in France during the 1850s and eventually served as a Union officer in the Civil War. After the war, he started a newspaper in DC where he brutally criticized President Grant and his administration for what Piatt saw as abuses of power and corruption. His mocking and biting commentary was often carried in papers across the nation, firmly cementing him in the Gilded Age society as a “gadfly” – someone who persistently annoys or provokes others with wit, sarcasm, and criticism (Information gleaned from Donn Piatt: Diplomat and Gadfly by Peter Bridges).

Piatt’s palatial home in Ohio offered him a respite from his somewhat embattled public life. Both he and his brother Abram built castles in Logan County, Ohio, but Donn Piatt built the larger, more impressive building. Piatt used local limestone to construct the monstrous house but created his own style by using the often-discarded, porous remnants of quarried limestone.

Most of the blocks are clean hewn, but he utilized many irregular sized chunks to give the building flair, flair which I thought translated into pure creepiness.

Check all of the corner blocks and particularly the decoration on the upper right side. The top looks like it has a hole, but it is where a large chunk of rough limestone was added. Some thought the house had gargoyles, but any flair along the top is clefts of limestone.

The crags and holes in the porous limestone gave it a look of decomposition and decay, and, coupled with the somewhat run down state of the house and it’s tall, imposing stature, created a perfect scary-movie set.

Inside, the house displays the high ceilings and heavy, intricate woodwork indicative of high status in the Victorian Era. The floors all had their own parquet pattern and each fireplace grate, mantle, and screen was unique. 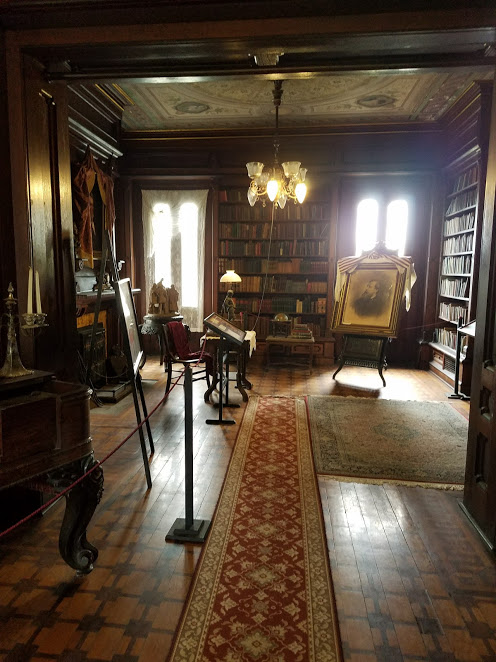 Perhaps most impressive, the walls and ceilings were handpainted by an Italian artist who used a combination of stencil and freehand work.

This bedroom exhibited some of the most complex painting, from the stenciled wallpaper pattern to the lace draping to the ornately painted ceiling.

Many of the walls and ceilings were in much need of repair, but doing so would require meticulous work at a very high price, and, as the lands are still privately owned, is unlikely to be completed.

After perusing the grounds around Piatt castle, we headed for the Ohio Caverns. I haven’t done much cave exploration other than the Lewis & Clark Caverns and Ice Caves in Montana, but I thoroughly enjoyed each of the those and do enjoy the often unsettling feeling of being underneath thousands of pounds of earth.

Driving into the Ohio Caverns is an odd experience since the grounds consist of rolling, grass-covered hills. I expected a cliff face with the jet black maw of a cave and was surprised to learn the caverns are underneath the largest mound (barely even a hill), which we parked on. A short set of stairs led down the small opening of the caverns and a passageway under the earth opened.

A vintage postcard showing the parking lot and visitor center. The caverns are underneath the cars.

The Caverns were discovered by a young farmhand in 1897 who was curious why the water in a sinkhole drained quickly. He dug through to the limestone layer, broke off a chunk, and was met with a gust of cool, 54-degree air. He proceeded to make a hole big enough to shimmy through and became the first living thing to enter the caverns. The caverns were formed by an underwater, glacial river, and when the farmhand entered, much of the caverns were filled with mud and silt deposits. The farmer allowed people to visit the caves, but those early visitors probably didn’t see too much since the passage back to the impressive crystals was mostly blocked by mud.

The debris left along the right side demonstrates how high the mud and silt was when the caverns were first discovered. Early visitors would’ve had to crawl through the short passage.

During the 1920s, crews dug and hauled out most of the river deposits and found a roughly 6-foot passage carved through the earth, perfect height for most people to walk through. The early crews strung lights as they went, eventually illuminating almost 2 miles of caverns.

The guided tour eventually winds its way back to the finales of the tour, the Crystal Sea, Palace of the Gods, and the Crystal King.

The Crystal Sea – a reflecting pool.

The large white crystals are made of calcite, which is formed by water slowly seeping through the limestone. Calcite forms very slowly, at a rate of about one inch per 500 to 1,000 years and needs perfect environmental conditions to exist such as steady temperature and high humidity. The Ohio caverns maintain a perfect 54-degree temperature with 90% humidity year round, and the oldest crystals are thought to date back 250,000 years. 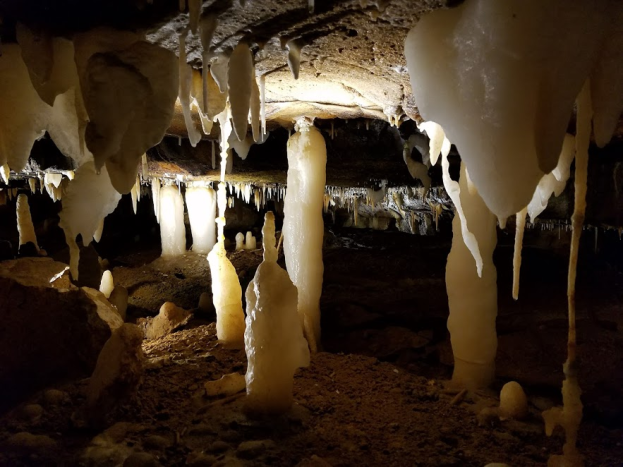 The crystals take on all kinds of shapes, from skinny “soda straws” on the right to the more bulbous ones in the foreground. The Ohio Caverns have a lot of columns and pillars that are formed when stalactites and stalagmites meet.

The caverns are also known as one of the more colorful underground venues. The colors are formed by iron oxide (rust) and manganese oxide.

The beehive or pinecone looking tops of these columns are made of the same calcite crystal encased in iron oxide (rust), producing not only a differnt color but also texture.

I also spotted some green in places and was informed that it is an algae whose spores are deposited by human visitors. As is usually the case, the introduction of humans to the caves has been mainly detrimental, with early visitors carving names into the side walls, taking crystals as souvenirs, and touching just about everything they could. Each time someone touches the walls, the oils from their hands completely impedes the formation of any new crystals, so it is imperative that visitors keep their hands to themselves. 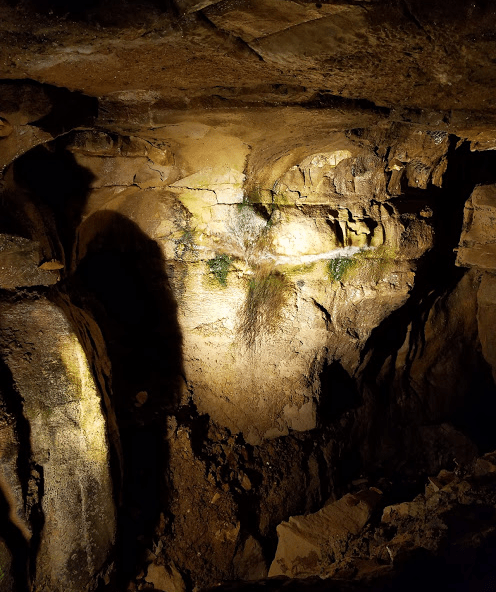 Green algae growing on a side wall. Also, note how baren the wall and ceiling look compared to previous pictures. This was part of the section where early visitors were allowed to run rampant, and their interaction with the area has rendered it fairly dormant.

If you ever find yourself in central Ohio, be sure to stop at both the Piatt Castle and the Caverns – both offer a view into the history and landscape of a state I sadly have always overlooked. My time spent in Ohio was fantastic and the people I met were some of the kindest, most giving I’ve met anywhere. Thanks to all who made my short Ohio stop a great one!

8 thoughts on “Caves, Castles, and Cars in Ohio”