Very few homes can you enter for the first time and feel like you are back again after a long absence. However, that is exactly what I experienced as I pulled in to spend a week with good family friends in West Virginia. We are all Montana natives, so maybe that has something to do with it!

Since we had quite a lot of catching up to do, I planned on staying roughly a week and enjoyed some rest and further exploration. One of the first places we ventured to was Slade, Kentucky where we visited a natural bridge. As we drove into Kentucky, the landscape opened up little by little until I caught glimpses of large meadows and hayfields. Most of West Virginia was very hilly and wooded, giving a “flat-lander” like me a touch of claustrophobia. The trees were gorgeous, but I felt a little disoriented since I couldn’t see very far in the distance to gather my bearings.

To get to the bridge, we rode up a chairlift and then walked over the bridge itself. I didn’t even notice when we arrived and were walking along the top of a precipice with its middle missing. It was massive! 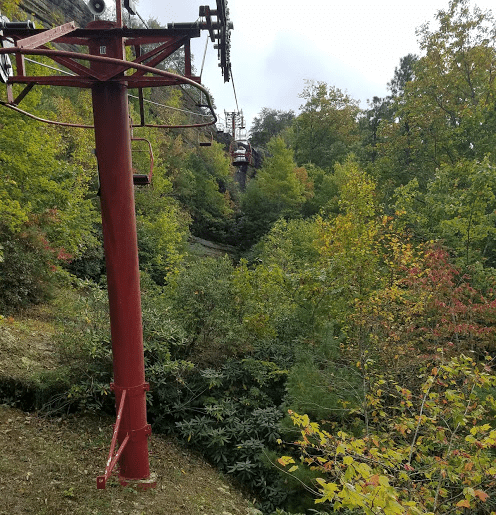 We found a trail leading underneath the bridge and had to shimmy along through a narrow fissure between two humongous rock slabs. We can all gladly say we made it without leaving any parts behind on the walls even though it was tight! 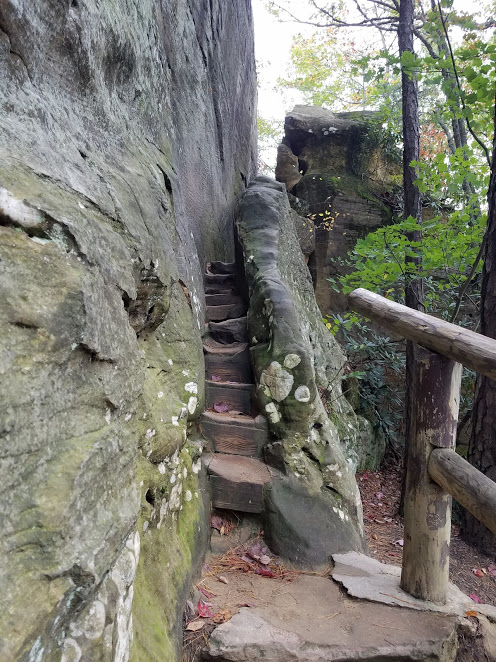 The countryside was almost totally covered in trees, a stark contrast to both the Montana and Colorado mountains I’m used to, and now I can see more readily why early Europeans called the western ranges the “Rockies”. So far, I haven’t found much rock to look at in these eastern hills!

A look at the bridge from across a valley.

The ride back down the chairlift was much more interesting than the ride up. I had never ridden one down since I’m always on skis. Let me tell you, going back down was quite an experience since I didn’t realize how high up we had trekked nor how steep the drop off was from the top.

I’m not very afraid of heights, but this gave even my stomach a little turn.

After the Natural Bridge, we took off for Lexington, KY, home of the Kentucky Horse Park. 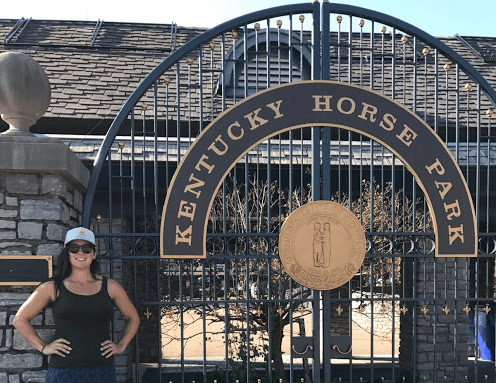 This sprawling 1,224-acre park houses both a multitude of horses and the International Museum of the Horse, Breeds Showcase, Hall of Champions, National Horse Center, Rolex Stadium, and Alltech Arena. The site hosts many shows, from local all the way to the FEI World Equestrian Games.

We arrived after the horses had been turned out at 3:30 and were also too late to go in any of the museums, but I thoroughly enjoyed a leisurely stroll through the grounds. The horses looked extremely well cared for, and I learned the Park stables a few specimens from very rare breeds, such as the Akhal-Teke, Marwari, Fell Pony, and even a Chincoteague Pony. If visiting during normal hours, one could go to the Breeds Barn and see an example of each breed and read more about them. The Park also holds multiple shows each day where different breeds are costumed in authentic garb and taken around the arena to demonstrate their history and specific breed attributes. I would definitely like to return and see that someday.

All the horses looked very happy.

The barn where we did get to see some horses was the Hall of Champions where famous racehorses and pacers are retired to greener pastures. It is easy to forget that most horses reach and pass their athletic prime often within their first five years but can live into their twenties. Unless a horse is being used for breeding purposes, once their athletic ability begins to fade, the spotlight finds a new target and the old guys are forgotten. The Kentucky Horse Park is a place for those who enjoyed fame and fortune and made a name the public may remember. The only horse I recognized was Funny Cide, the first New York-bred horse to win both the Kentucky Derby and Preakness in 2003.

I wasn’t able to get a very good picture of Funny Cide, but I found this one from thoroughbredchampions.com. Funny Cide is posing in front of the Hall of Champions with Magic, a miniature therapy horse. Supposedly, Funny Cide doesn’t like other horses but will tolerate minis. He is also famously very cranky and strongwilled. He wore a muzzle when we were there because he has a tendency to overeat and also nip people. However, he remains one of the most visited horses to ever live in the Hall of Champions.

Each resident has an informational sign describing his accomplishments, and while I didn’t remember a lot of them, I enjoyed the fact that their efforts were still being recognized (one big name many may know was Cigar, who was housed in the Hall of Champions until his death in 2014).

Current residents. All are either thoroughbred racehorses or standardbred pacers.

As the sun started setting, we headed for home, but not before we got lost trying to get out of the horse park. It is a really big place!! After lots of laughs, we finally found our way back to the freeway, but I am reminded that it is often these times when things “don’t go right” that stay with you the longest. Now when I think of the Park, I will always giggle about our experience being stuck in its Bermuda Triangle.