When I started planning my trip, I had a fairly nonchalant attitude towards Niagara Falls. I was neither that excited nor did I have an expressed dislike. However, after asking a few veteran visitors, I kept getting the same response: the falls were definitely worth a trip. And I can now say that no one I talked to was a liar.

I pulled into the town of Niagara Falls, NY in the late evening with plans to do a quick run through of the falls in the morning, perhaps leaving the area by early afternoon. How wrong was I with that timetable expectation. As the dust settled on my Niagara Falls excursion, the sun had started its descent, and my legs had walked many miles on both American and Canadian soil.

How much research had I done before my Niagara adventure? None, which is typical for me. I had no idea what I was going to encounter rather than some water falling over some rocks. I didn’t know there was so much walking with increasingly interesting views to be had, thus I was doubly impressed when I found a park map.

Created in 1885, Niagara is the oldest state park in the nation and sees an average of 30 million visitors a year.

When I learned there was so much walking, and that Zeus could go, the attraction became much more attractive. As we headed out to explore Goat Island, the weather sat heavy in the clouds, keeping the air cool and the colors a bit muted.

The first fall we encountered was the west side of American Falls. Since we were on the same side as the fall itself, viewing was a little tough at first, but the park has done a great job developing overlooks that offer the best views possible. The impressive design is credited to the creative genius of Frederick Law Olmstead, the landscape architect responsible for wonders such as Central Park in New York City and many university campuses including Berkeley and Stanford.

The very edge of American Falls with a “Maid of the Mist” boat coming into view. For $18.25 you can take a boat ride into the mist of all the falls, but as it was only about 50 degrees, the wet boat ride didn’t hold a lot of appeal for me. Another day!

As we made our way west towards Horseshoe Falls, the views of American Falls changed and I started to grasp how incredibly massive the falls are. Water plunged roughly 100 feet and carried its own power both in the air and when it hit rock at the bottom. Spray flew into the air at all levels of the falls, creating a mist that covered the walkways and handrails.

American Falls has a lot of jumbled rock at the bottom that shortens the falls and creates even more mist.

The Falls are to the left, I promise.

With an already overcast sky, the mist almost completely obscured the falls. I struggled to get a good photo and didn’t have much luck since most show white fuzz with some big buildings above it. In person, I saw the immensity of the fall and most of all heard the monstrous roar it produced. People had to shout to be heard on the overlook as the mist and wind created by the falls whipped around the weathered cliff we stood on.

We walked the length of Goat Island, which has beautiful sights around every corner.

After we finished walking Goat Island, we headed to the Canadian side where we could see Horseshoe Falls in its entirety.

When on American soil, we were standing on the edge of the left side and couldn’t see the curvature of the massive falls.

Being close to Horseshoe Falls was hypnotizing, like watching a fire. The water kept flowing and changing, mesmerizing me in its variance and endurance. The power of the water, like fire, is similarly frightening and has inspired humans to do crazy things in its defiance, such as tightrope walking, kayaking, cliff jumping, and jet skiing off its edge. In most attempts, the water wins. 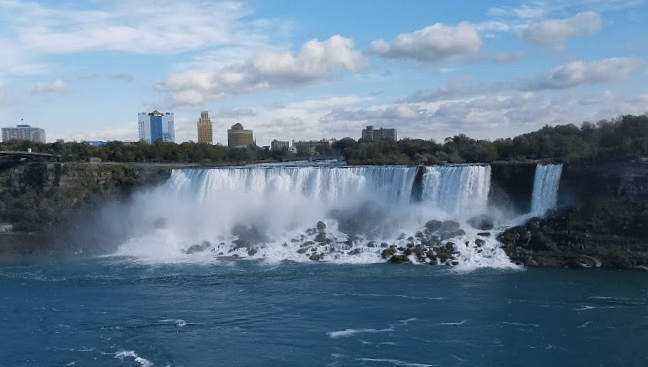 American and Bridal Veil Falls, both much smaller than Horseshoe.

Even though I would not call myself a numbers person, numbers do help put things in perspective. I give you the following stats from the Niagara Falls State Park website for your number loving pleasure:

As I researched how the advent of hydroelectric dams affected the falls, I ran into an interesting debate, as is fairly expected in issues of human interaction with nature. Before hydroelectric dams, the falls had even more water. Today, 60 to 75% of the flow is diverted upstream of the falls to create electricity used for both American and Canadian interests. Visitors now are only seeing 25 to 40% of the water and power Father Louis Hennepin, the first European to document the falls, saw in 1678.

The naturalist argument is pretty straightforward: today we are not seeing the true falls but rather a lesser representation of them. Plus, we are forcefully changing the natural environment of the falls, which inevitably produces altercations whose repercussions are difficult to measure.

Interesting debate aside, the Canadian side is very quaint! The north has, in my opinion, better gift shops, but both sides have great trail systems that allow one to walk miles up and down the high shoreline. The border crossing at Niagara was hands down the easiest I’ve ever experienced as well. Since Zeus was with me, I was expecting a little headache, but all we needed was my passport and were through with no problem. I had vet records ready, but neither side asked for them. 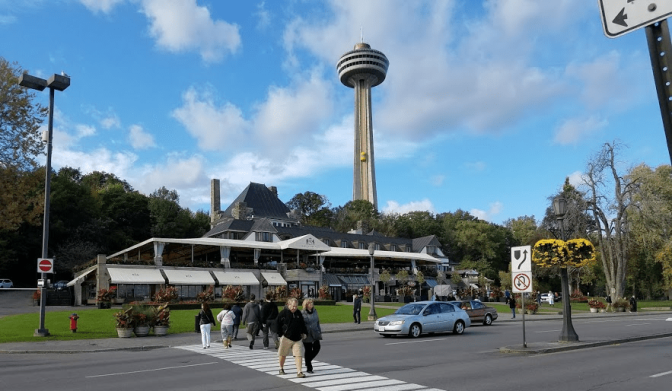 Queen Victoria Park, which offers gifts, meals, and lodging, with a view of the Skylon Tower behind.

Niagara Falls was definitely worth the trip, and I highly recommend everyone visit.

If you don’t believe me, listen to Zeus – that’s a lot of water!

I may sound like a broken record at this point since I’ve loved every place I’ve been. However, everything can be seen through a rosy light when you don’t have many expectations, keep a curious mind, are easily entertained, and find new to be as intriguing as amazement and grandeur.

2 thoughts on “Niagara Falls – Famous for a Reason”