I didn’t start this trip with the idea of seeing as many national parks as possible, but it has slowly developed into such. Perhaps it was the purchase of an $80 annual parks pass, which is TOTALLY worth the money since most parks charge upwards of $25 per visit. I have already made the pass pay for itself many times over, and I haven’t even reached Utah.

Mammoth Cave National Park was on my map after the Great Smoky Mountains, and the road out of Tennessee quickly became less congested and almost instantly declined in socio-economic status as we traveled north from Gatlinburg, TN. 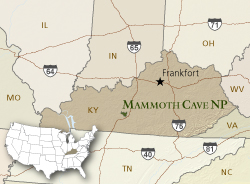 Mammoth Cave is hidden away from the busier areas of Lexington, Louisville, and Frankfort and, rather, sits in an area dominated by agriculture. The park is small and lacks the awe-inspiring mountain or ocean views that attract visitors to other parks. For comparison, over 2.9 million travelers visited Glacier National Park in 2016 while Mammoth Cave serviced only 600,000.

Side note: If you are curious, the most visited park last year was the Great Smoky Mountains with 11.3 million visitors, almost double the number of visitors to the second most popular park, the Grand Canyon, which had 5.9 million. Rounding out the top three was Yosemite with a little over 5 million visitors. While the Grand Canyon and Yosemite didn’t surprise me, the Smokies did since it is not a park I think of very readily when considering national parks. For full rankings, visit the National Parks Service Annual Ranking Report.

With Mammoth Cave’s lower attendance comes smaller accommodations and less upkeep. The park doesn’t have any dramatic entrance gates welcoming visitors or imposing lodges advertising its grandeur. Actually, when I drove into the hotel and visitor center area, I was instantly reminded of college dorms. 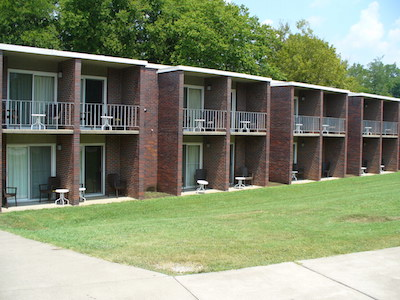 However, do not be dismayed, for I actually enjoyed the less obtrusive digs. The complex was built in the 60s and hasn’t seen much change since then, producing a feeling of nostalgia when walking the grounds (I wasn’t alive in the 60s, but I have a great imagination). Since I was visiting in the off season, it was even more quiet than normal, exactly the kind of environment I love. I have a hard time describing why, but I really enjoyed the park grounds even before I ventured into the deep.

Of course, the park is known for its cave, the longest known cave system in the world with 405 miles mapped to date. The number of miles changes almost constantly as teams of cavers continue to find more and more extensions. One guide said they estimate that over 600 miles of caves may exist. So far, the cave seemed to live up to its name: mammoth in size and mammothly underrated — I had never even heard of the place (and of course I know almost everything ;).

To go into the caves, you need to register and pay for one of many tours offered. I chose to do both the Historic Tour and the Domes and Dripstones Tour for $13 each. Each tour is two hours long, so I felt $26 for four hours of exploration wasn’t bad, and I would see two different segments of the cave with this combination of tours. There are other cheaper, shorter tours that show parts of these two longer tours. They also offer a Wild Caves tour for $55 on Saturdays where you go with seasoned cavers and explore the lesser known caverns. You have to pass a health check, wear a safety helmet and rappelling gear, and also sign up at least 6 months in advance since these tours are almost always sold out. Many other tour options are available and can be viewed at Mammoth Cave’s Informational Website.

The Historic Tour starts at the original opening discovered by French fur trappers in the late 1790s. However, archeological evidence suggests Native Americans had been visiting the cave for over 6,000 years. Early visitors used bundles of cane reed from the nearby creek banks to light their way back into the depths of the cave. Amazingly, researchers have found many of these ancient left-behind reeds miles back into the cave.

Once inside, the cave widens and a massive cavern opens, offering ample space for large tour groups to gather around old equipment left behind by miners and military personnel during the War of 1812 when the location was used to obtain saltpeter to make black powder.

Today, much of the walls are blackened from the fires used to purify the saltpeter, and the first mile or so has been drastically changed from its natural state. However, the size of the cavern is natural as miners usually dug down rather than out to ensure the sides of the cave didn’t collapse.

In the picture above, large black spots cover the walls and ceiling of the cave. The blackened areas are gypsum, a material now used in sheetrock and usually bright white. The reed torches of the ancient natives started blackening the gypsum since early European visitors noted the slightly blackened parts which then continued to soak up the increased smog created by the mining operations.

During the last 150 years, humans also had to leave their marks in scrawled graffiti etched into the rock or left on the ceiling with candle smoke. 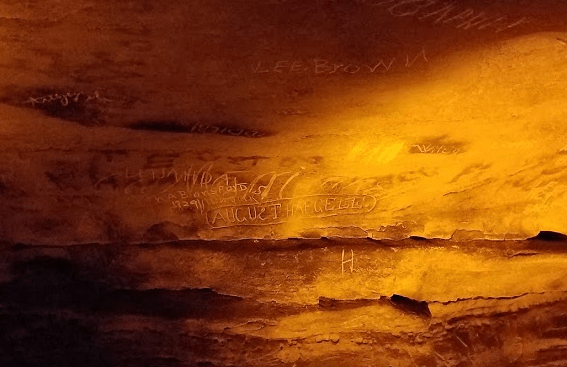 The Historic Tour continued to weave its way through the cave which becomes increasingly tight. Two parts of the tour are famous mainly due to their names, which would now most likely be considered a little un-politically correct: Fat Man’s Misery and Tall Man’s Misery.

As one could probably deduce, Fat Man’s Misery is a very horizontally challenging passage with roughly two feet of space to wiggle your body through. The roof of Tall Man’s Misery dips down to around 3 ½ feet, making for a tough crouch.

After making it through these areas, the cave slopes steeply upward, with a large staircase built to take you back towards the surface. I was instantly reminded of the scene from The Lord of the Rings where Saruman is creating his army or Orcs in Middle Earth. 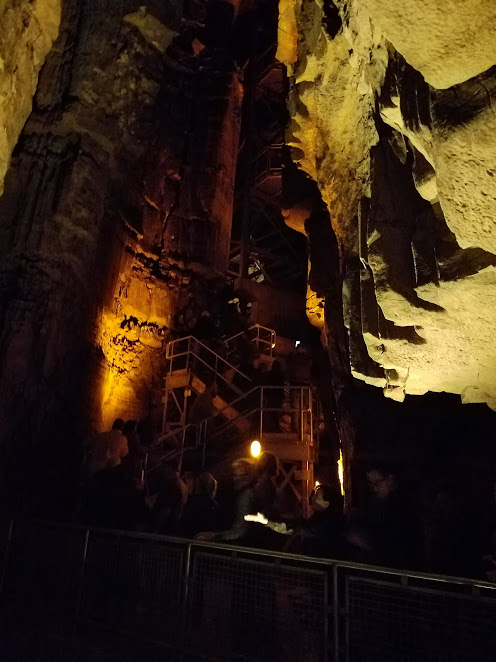 The Historic Tour’s cave is known as a “dry cave” and thus doesn’t have many stalactites or stalagmites which appeal to many cavers. The other tour, Domes and Dripstones, explores a different section of the cave with more cave “art”. The tour was instantly different and as soon as I entered the cave I was hit with a wave of humidity. The moisture present in the caves is dependent upon how big the shale cap is above the cave, so this part of the cave had a very porous cap which allowed groundwater to percolate through the shale, down into the limestone and create iconic features such as large domes and drapery. 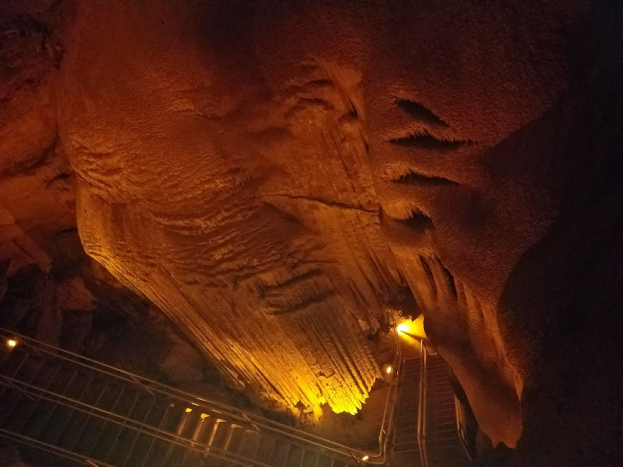 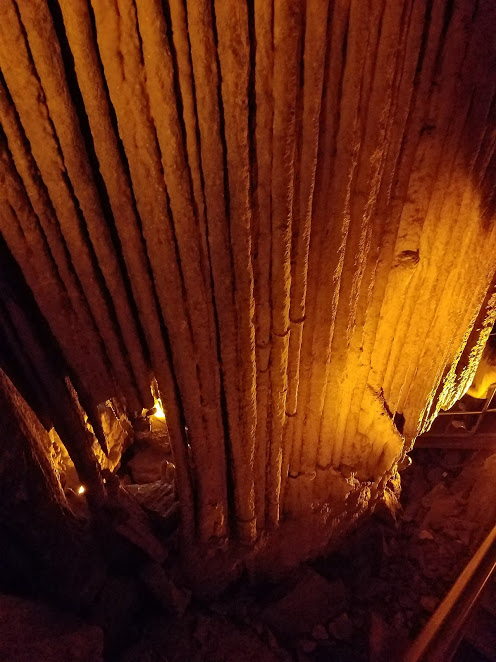 One of the most popular is a formation called “Frozen Niagara”, which features some of the largest drapery in any North American cave. Drapery is the crystallization of calcium carbonate into large sheets that almost seem to flow.

Overall, I highly recommend Mammoth Cave since it offers a variety of interesting above and below ground excursions. Plus, the grounds are nice and dated, if that’s something you like!

One thought on “The Forgotten National Parks, Part I: Mammoth Cave”