6 Legged Travel is composed of a biped (Toni) and a quadruped (Zeus).

Toni grew up on a farm and ranch in north-central Montana where she developed a love of the land and all its creatures. Rabbits, cats, dogs, goats, horses, chickens, and steers were all known to follow her around at various times during her childhood. Now she is a 32 year old high school English and History teacher who decided to save her spare coins for a year and take a break from the rat race to travel. Perhaps she will go back into teaching; perhaps she will run away to Antarctica. Only time can tell.

Zeus comes from mysterious origins, but his real story began in 2010 when he was transferred from the Kalispell, MT dog pound to the Tobacco Root Humane Society in Eureka, MT. There he lingered in depression until Toni found him and realized he was the best dog she had ever seen. He learned to run trails with her and found that water is like crack for him.  Zeus has lived with Toni for 7 years and during that time has climbed mountains, been a competitive dock jumper, learned many tricks, developed obsessive tendencies towards anything related to fetching and water sports, and become the lowest maintenance roommate Toni has ever had. Together they hope to find as many new adventures that their six legs can handle. 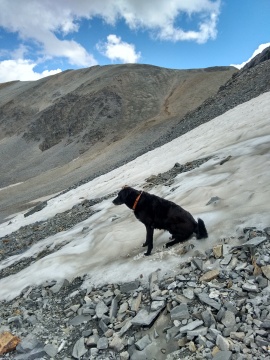