Since I now have one 14er under my belt, why not do two in one day? Our latest hiking excursion led us to Grays and Torreys Peaks, two 14ers that just happen to be a half a mile apart, making for a pretty easy double play. Plus, these two are listed as some of the easiest to hike, so I graciously agreed to a rematch with the place where the air is scarce.

Grays marks the highest point on the Continental Divide Trail, which travels from the Mexican border to the Canadian Rockies. The Colorado section is one of the most strenuous sections of the roughly 2,700-mile trail.

The Triple Crown of thru hiking: The Pacific Crest Trail (PCT), Continental Divide Trail (CDT), and the Appalachian Trail (AT). All three have their own challenges and determining which is most difficult seems to be very subjective. The jury is still out on whether I will ever attempt any of them.

Grays and Torreys also happen to be some of the closer 14ers to Denver, with a trailhead that only takes about an hour and a half to reach. The last few miles are rough and slow driving on a well traveled but rocky and narrow mountain road. As I’ve mentioned, many people hike in Colorado, and cars lined the road on both sides within about a half mile of the trailhead, forcing an early park and walk.

The trailhead featured an interpretive sign at the start of the hike, detailing a brief history of the peaks. Early Arapahoes called the two peaks “The Ant Hills,” which I think speaks volumes for not only their perspective on nature but also their sense of humor. If these are ant hills, I definitely do not want to meet the behemoth bugs that made them! 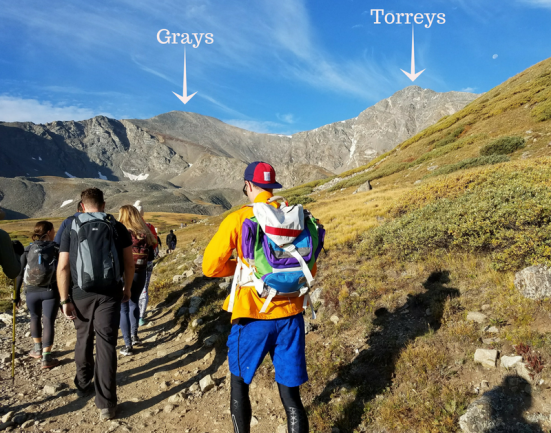 While Torreys looks bigger, perception can be strange. Grays is a whopping 3 feet taller. Also, I found it is very handy to hike with friends who like vibrant colors since they are easy to spot!

Later, miners found both gold and silver in the drainages surrounding the two peaks, and placer mining structures quickly sprung up during the 1850s and 60s. Miners collectively called the mountains “The Twin Peaks” while, reportedly, many prospectors unofficially named the peaks after themselves.

In 1861, Charles C. Parry became the first European to reach the summit of the southern peak and named it after his friend and fellow botanist, Asa Gray (often considered the most important botanist of the 19th century and the author of Darwinia, a discussion of the potential connections between science and religion). Parry also climbed the other ant hill and named it after another colleague, John Torrey, a prominent botanist who focused his work on the flora of North America. 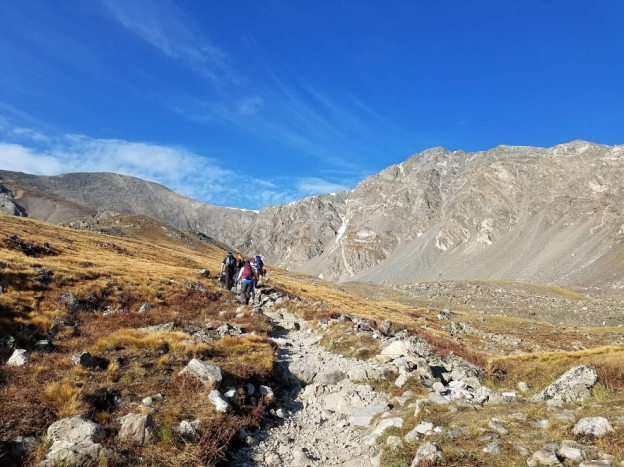 Neither Gray nor Torrey came to see their namesakes for eleven years after Parry named them. Supposedly, naming squabbles arose among the aforementioned prospectors who claimed the peaks bore their names, and who may have had more credence since neither Gray nor Torrey had even seen them. To put rumors to rest, Gray and Torrey cemented their names on the map of the Front Range when they climbed their peaks together in 1872.

Taken from the top of Torreys, looking back at Grays. The switchback trail becomes apparent in the scree and continues through the saddle over to Torreys.

During the eleven years between when Parry first summitted and Gray and Torrey claimed their namesakes, another man by the name of Richard Irwin had developed Parry’s original trail to Grays summit into a horse trail to accommodate pack horses needed for the booming mining establishments on either side of the peak (Irwin also claimed right to the naming of the peak). By the time the botanist duo climbed their mountains in 1872, the trail to Grays would’ve felt like a highway. The scramble to Torreys was never engineered for horses since it has much more talus and a steep climb to the top. Plus, there wasn’t a need for horses to bag two peaks in a day – they don’t keep ego records like crazy humans do.

My experience of Grays and Torreys was fantastic. The weather was perfect, and while I was the slowest of my group again, I had a much more enjoyable time. Hiking at this elevation is still very tough, but I am feeling more acclimated.I usually like to run back down the trail, but the weather was so fantastic and the light too great to not stop and simply soak up the environment. I knew weather was rolling in and we needed to get off the mountains, but I had such a hard time leaving. Hiking 14ers is amazing, but having to get off the mountain by 1 or 2pm could become wearisome. Cutting a hike short is much better than getting struck by lightning though, so I will take an early departure.

A good look at the drainage between the peaks. It’s easy to see how the valley creek beds could’ve been littered with gold and silver deposits before the 1860s.

Another great day spent in Colorado, and with only one weekend left, I’m already getting a little melancholy to leave.

I want to give a shout out to the following links, from which I gathered most of my historical information: